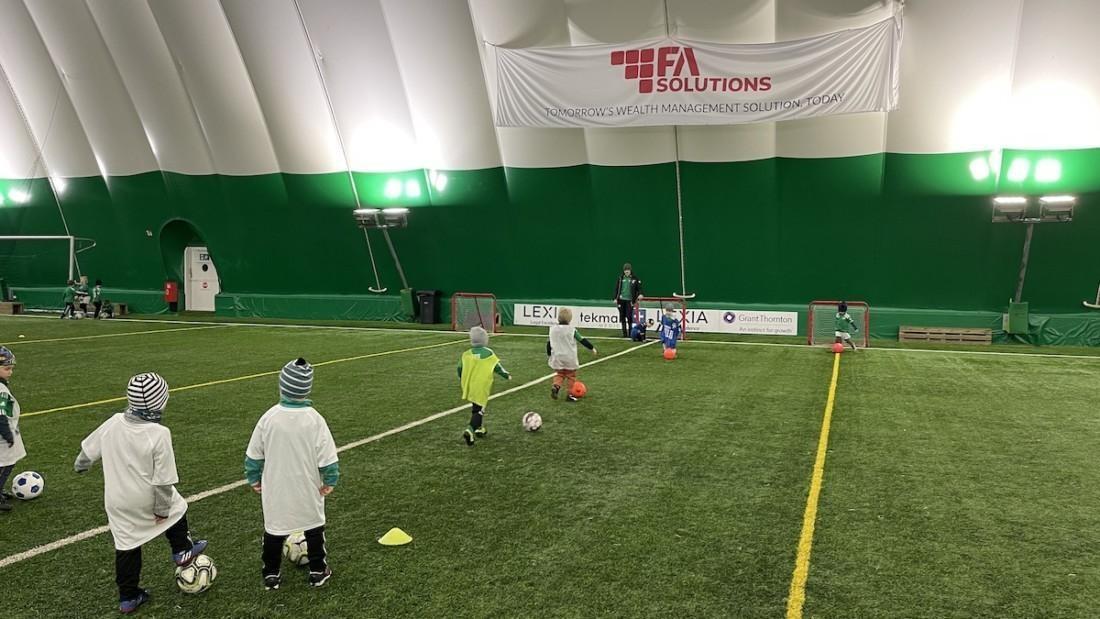 FA Solutions is happy to keep contributing to children’s health and well-being and the whole society by supporting GrIFK (Grankulla IFK) Fotboll. GrIFK Fotboll enables football as a hobby to over 700 people, mostly children and teenagers. In addition to financial support, FA Solutions helps the club to measure its SROI (Social Return on Investment) with a model developed by UEFA. GrIFK Fotboll has scaled up its activity despite the turbulent times in recent years.

In spring 2021, FA Solutions started to support GrIFK Fotboll, a bilingual (Finnish & Swedish) football club based in Kaunianen, Southern Finland. GrIFK Fotboll has teams from 5-year-olds to adult groups but primarily junior teams. We started this sponsorship to give back to the community and contribute to building a solid base for our future society by supporting especially children’s health and well-being by enabling football as a hobby for many.

However, we will also help GrIFK Fotboll to collect and analyze data to measure their SROI (Social Return on Investment) with a model developed by UEFA (The Union of European Football Associations). According to the first SROI calculation round, the annual benefit GrIFK Fotboll’s activity brings to Finnish society is 5.5 million euros.

GrIFK Fotboll focuses on increasing diversity and inclusiveness in football

We are pleased to hear that despite the challenging couple of years that the COVID-19 pandemic brought upon sports clubs, GrIFK Fotboll has been able to successfully revive its activity after the pandemic and even scale it up. Matti Hannuksela, the Chairman of the Board of GrIFK Fotboll, says that the amount of members has, in fact, remarkably increased lately.

The club is also committed to enhancing diversity within football and making football an accessible sport for everyone. Hannuksela is excited to tell us that the number of female football players in all of Finland hit the historical number of 35 000 active players last year. Also, GrIFK Fotboll has gained more female members.

“It’s very positive to see that our member count has increased from 600 to over 700 in a couple of years despite the difficult times, and also that diversity has increased within our membership, for example, more girls are joining all the time. We are really making an effort to make everyone feel welcome and offer possibilities to all, despite the level they want to play on. One could say that football has turned into a net profit gainer in Finland in recent years due to the increased visibility resulting from the success of both men’s and women’s national teams.”

Matti Hannuksela, Chairman of the Board at GrIFK Fotboll

The club has made active efforts to grow the membership count and serve its diverse membership better. Recently, GrIFK Fotboll has started new partnerships with two other local football clubs nearby to expand practice possibilities for children to guarantee that everyone can continue the hobby on the level they prefer.

Also, the competitive level has gone forward: GrIFK Fotboll currently has 4-5 junior teams playing on the highest national level, and two junior players have even attended a training camp with the Finnish U16 national team this year.

GrIFK Fotboll has also contracted with FC Lahti United, a Finnish football club playing in the Finnish Premier League. The cooperation opens the player path for GrIFK Fotboll’s members to the top in Finland and all the way to the international fields.

“Our solutions in the finance industry help our clients act more ethically, responsibly, and according to good governance, and we wanted to broaden the positive impact of our activity with this cooperation with GrIFK Fotboll. That’s why it’s great to see that GrIFK Fotboll has been able to grow and leverage the multiple benefits of their activity in the area. We are happy and proud to keep supporting them!”

In September 2022, GrIFK Fotboll will organize the FA Solutions Cup, a playful penalty shot competition for adults organized in the FA Solutions Arena in Kauniainen. If you wish to gather a team from your coworkers or friends and attend this merry sports event with a good cause, read more here (in Finnish).